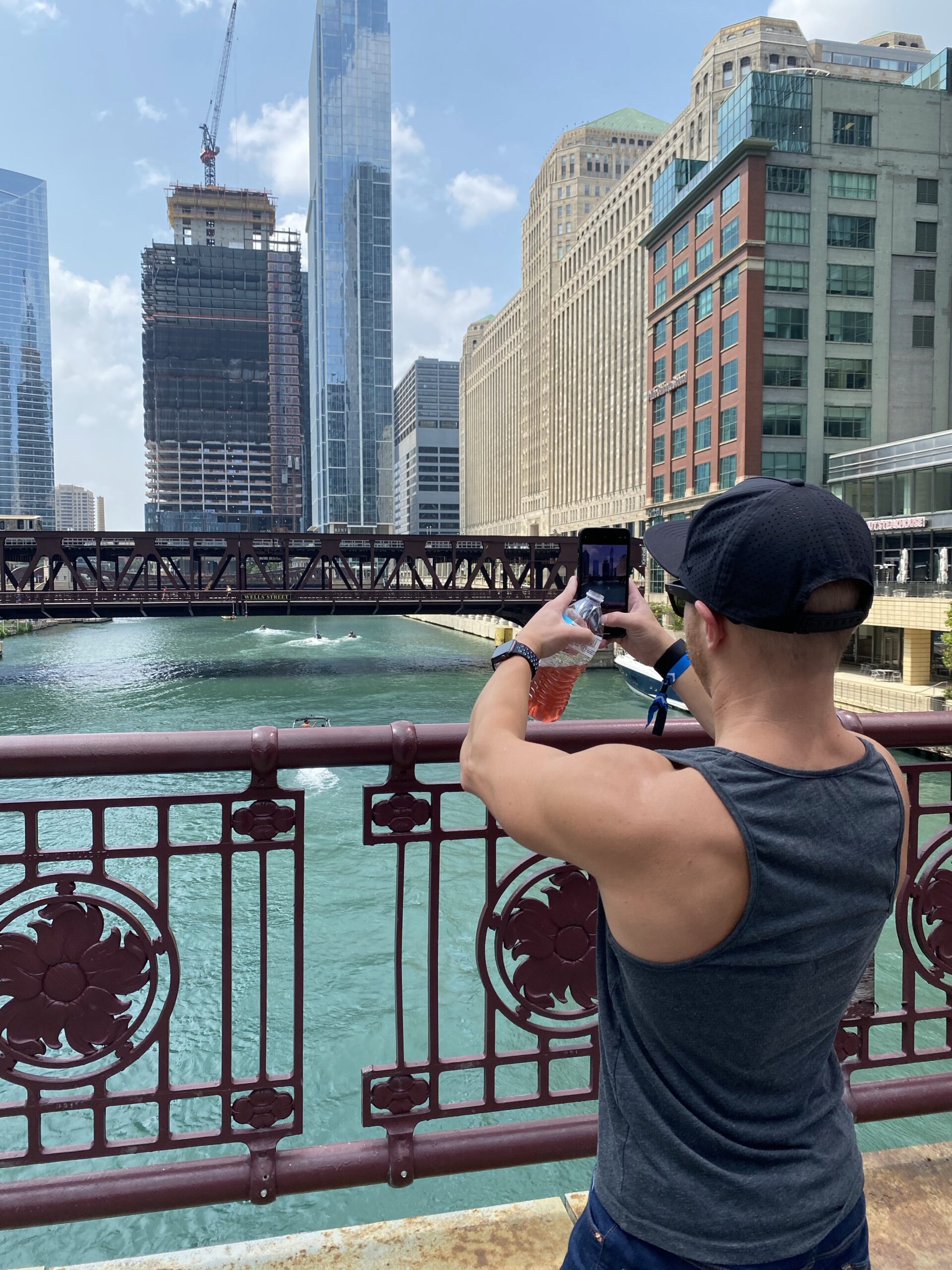 Last weekend I visited Chicago to attend Market Days with my friend James. If you’re not familiar with the event, think pride 2.0. Street feast, entertainers, food, drinks and a solid nightlife scene.

I had booked my flight many months ago when rates were cheap (paid 12k miles/way) not sure if I was going to go or not, but booked anyways knowing there was flexibility. After James decided to go with me, we booked his flight and a hotel. We spent hours looking for an Airbnb and everything was either way out of the way or crazy expensive. We ended up staying at Moxy downtown which was near a train line that got us to Boystown/Halstead easily in about 25 min.

Our room at Moxy was small but nice. Very modern and still affordable. The bathroom layout was kind of weird. The sink and shower were out in the open with the toilet getting its own stall. When we arrived we were greeted with a complimentary cocktail, which was great as were the tacos at the on-site taco bar.

After checking in on Friday we got some drinks and snacks for our room as well as a quick dinner before going out to Boystown. We found an Irish pub called Fado’s nearby and we both ordered cocktails and burgers. The cocktails were barely drinkable and the burgers looked like grade school cafeteria mystery meat that was double deep fried. Neither of us could finish it and we were surprised neither of us got food poisoning from it. This place was so bad that it became an ongoing joke the rest of the trip!

Post dinner we quickly went back to the room to change and freshen up to go out. We ended up at Hidrate for most of the night. All of the major bars/clubs in Chicago are currently requiring proof of vax to get in. We had a blast dancing all night until the ugly lights came on at which time we made our way to the train to head back.

Saturday we managed to get up and have a late brunch at a nearby restaurant called Beatrix. We both had lemon pancakes and bacon, both of which were delicious and helped to make up for our dining experience the night before!

From there, we made our way to checkout the street festival in Boystown and pickup our Saturday & Sunday circuit party tickets from a local living nearby. We spent a bit of time checking out the vendors and met up with some friends, then went back to the hotel to re-charge for the night and freshen up.

When we arrived at Argon ballroom for the party the first order of business was to get our proof of vaccination wristband in order to be let in. A quick metal detector scan and pat down from security and we were in! It was the first circuit party for both of us so we were both overwhelmed and impressed with the production quality and size! We made it to almost the end of the party, leaving around 4:30a. The train ride home was extra fun since it was filled with people from the party! When we got back, we chugged Party Aid which we believe is the reason we were never super hung over.

On Sunday we woke up at a surprisingly early time and made it to drag brunch at Wynwood. For $60 each we got bottomless mimosas, a brunch entre and a drag show for 90 minutes. This was easily a highlight of the trip! The service was great as was the food and the (strong) mimosas! Despite one annoying party near us, the vibe was super chill and super fun.

Bottomless mimosas at brunch called for a recharge/nap before Sunday nights party. After recovering and grabbing dinner, we headed to the street fair to see Trixie Mattel perform live before heading to the Sunday night party.

The Sunday party was just as fun even though it was a little less crowded. We got there earlier this time and got to see the full show open. We were all held in the lobby until drag queens and other performers did a little act then lead the crowd into the main room (links to video, slightly NSFW).

Again the train ride after was a fun experience given it was mostly people from the party. This time at the stop to get on some person was yelling homophobic slurs to a group of probably 20+ gays (they were kinda outnumbered).

Monday, our departure day, came and thankfully we had a light flight and late checkout. We checked out of the hotel and stored our bags then went for a late lunch off-site. While at lunch, we found out our flight was canceled until the next day because of storms. At the time I think we were both semi excited to spend one more night in Chicago. We booked a room at an Aloft which I plan to cover with the trip delay coverage on one of my credit cards.

That night neither of us were super hungry but we found that the hotel next door served small plates at the bar. We went there and split some chicken skewers and garlic fries. Both of which were average but the highlight of the night was the bartender serving us. For one, he had a huge bruise on his arm which he proudly admitted was from a drunken event. I’m honestly struggling to even describe him lol. Most of his sentences didn’t make sense. He decided he wanted to try out a “cocktail of the day” on us for the next day but by the time he finished making it (which took about 30 minutes because he kept getting distracted) he totally forgot what was in it! It was mediocre at best.

On Tuesday, we checked out of Aloft and made our way to the airport on the hour long train ride. At the time, our flight was on time and we were actually semi-rushing to it. We had a bit of time and grabbed some quick food and sat down to eat it.

While eating, a woman and her young daughter walked by and the woman made direct eye contact with us and said to her daughter “Those fags are going straight to hell.” We both looked at each other and kinda laughed it off. Not that it’s right what she said, of course not, but we’re probably more satisfied with living our real life’s than her, likely, dull fake life.

Once we got to the gate, there was a 15 minute maintenance delay… then 30 minute delay… then hour delay… then indefinite delay due to weather. At this point we ended up meeting with another Cleveland friend also stranded on another flight at a wine bar.

Eventually we had a boarding time for our flight, but the pilots were about to go “illegal” meaning they reached the max number of hours they could work. They got approval for two more hours and we boarded the flight. We taxied out to the runway and were about to takeoff 10 minutes before the pilots went “illegal” when all flights going east were canceled for the night. This was around 1am.

Once we made it back to the gate and before deplaning, we were told hotel accommodations would be made and to go to customer service. After waiting around 2.5 hours in line at customer service, we were told that not only could they not get us on a flight until Thursday but that because it was a “weather delay,” they wouldn’t comp a room. Also at 3:30am, it’s kind of hard to find a room for that night(morning?). They eventually gave us info to get up to $200 comp a room for Wednesday evening which we used at the Wyndham Mag Mile. Luckily we found a buddy that was awake with a spare bedroom that let us crash from about 4:30a-noon Wednesday morning.

Trying to make the most of our extended stay and slightly malnutritioned from the day before, we found a place called Wood in Boystown that had all night happy hour on Wednesdays. For $18-19 you got a select entree and cocktail (most of the entrees on the menu were $18-19 alone, so with a $15 cocktail, not a bad deal). The drinks and food were great! At this point we were both exhausted and ready to get home but appreciated the quality of food and service.

Thursday eventually came and thankfully our 2:15p flight took off on time and got us home! All in, we spent an extra 3 nights (one mostly in the airport) in Chicago than planned. Otherwise, super fun trip!

Thankfully we made it back! Unfortunately, we’re still paying for the fun weekend with breakthrough COVID infections. More on that in the next post as that’s an ongoing story…